What do you say?

What do you say?

“You’re a total slacker,” she shouted.
“No one can ever please you,” he retorted.
“Get your act together,” she continued.
“You’re so bossy,” he replied.

In the 1960s as a young counselor I led encounter groups. Many of us were looking for practices to help us speak our minds more freely. In some ways, such free expression proved satisfying. Yet I began to notice that once the initial rush of emotional expression subsided, many group participants still raged at others for presumed slights, projected ill will and other dissatisfactions. Rather than finding the healing they were looking for, some felt hurt and vulnerable. Even though they were learning to express themselves, something seemed off. Since then, I have discovered other approaches to effective and kind communication through adapting the teachings of Buddhism and systems theory.

In the early ’70s I spent a year in India immersed in the practice of Buddhist meditation. After I returned to California, my approach to counseling no longer sufficiently fit with the insights I had experienced in India. I started to question some of the assumptions and beliefs I had been bringing to my work. For instance, earlier, when I was unhappy, I assumed either that I was doing something wrong or that something outside of me was wrong. Knowledge of the First Noble Truth— the fact of suffering in life—opened my eyes to the inevitability and impersonality of suffering. I came to see that everyone at times will find life unsatisfactory, so feeling unhappy no longer seemed as personal. Eagerly looking for ways to infuse my work with a Buddhist perspective, I

Today, my work as a marriage and family therapist and communication trainer is profoundly informed by Buddhist teachings as well as a contemporary interpretation of teachings on right speech—communication that is respectful, accurate and nonharming. Cultivating right speech is similar to cultivating helpful mind-states. Both lead to increased harmony and peace. As we develop more awareness of our habits of speech, we step back and become more discerning about which thoughts and feelings to express

(lovingkindness, compassion, etc.) and which to simply notice and let go (hatred,

stereotyping, etc.). We can become more skillful about what to say and what not to say to promote harmony.

Right speech is challenging for most people. Habitual beliefs and actions often override intentions for kind communication. People who grew up in families that openly expressed contempt and blame often find those same patterns of speech erupting from their mouths when they’re upset. For example, I worked with a couple who tended to speak to each other with contempt when they were upset, using the same disdainful language that their own parents had used with them. (This style of communication, not surprisingly, correlates with shorter marriages.) By contrast, people raised in families with more skillful communication habits usually have more viable options in handling difficult conversations.

Reflecting on my 1960s encounter groups, I now see that many participants came from families in which they didn’t feel able to express themselves; they enjoyed the “let it all hang out” culture in the groups, speaking their minds without considering the

consequences. By inviting participants to speak so freely, group leaders were unwittingly encouraging them to reinforce habitual patterns rather than helping them cultivate

Gradually, as I apply the teachings of Buddhism to my work, I see how people can learn to communicate in ways that are more consonant with the inner peace they yearn for. Their use of language can invite right speech or strife. Here’s one example: Sybil says to Richard that she thinks he’s not respecting her when he shows up late for their dates. She then checks out his side of the story, practicing mindful discernment by recognizing that she doesn’t really know what Richard’s lateness means. Before, she would have characterized Richard as a “disrespectful person”—accusing him and

provoking his defensiveness. Now, without using disrespectful words, she can ask him for more information.

Responding to Sybil’s skillful speech, Richard is able to listen carefully and reply honestly and kindly. Without defensiveness, he explains that he is often late for

appointments and has a general problem being on time. Still, he respects and cares about her. Hearing this, Sybil feels less reactive than she had initially. She understands that his lateness isn’t personal, even though it still frustrates her. The two want to work this out, and by maintaining equanimity and hearing each other’s messages, they both feel optimistic about finding a solution.

Like meditation, skillful listening—being present to each other’s thoughts and feelings without evaluation—helps open up a dialogue even when people have

considerable differences. Mindful listening can nurture a safe place for differences to arise and for people to mutually learn what they can and then move on. When a couple like Sybil and Richard argue, and yet listen to each other’s viewpoints, new insights can arise between them, leading to more clarifying conversations. Likewise, skillful talking encourages skillful listening.

Sadly, knowing about right speech is different from being able to implement it.

The way we treat others can be deeply ingrained. For instance, when people hear a different point of view, they often automatically agree, disagree, judge or evaluate. Knowing how to listen and talk skillfully often requires practicing new behaviors that take time to learn. If the listener practices putting her own thoughts and feelings aside and makes a space for just listening, then understanding becomes more likely. I’ve found that as people practice new communication styles, especially mindful listening and non-

blaming speech, their sense of who they are and what’s possible can profoundly shift.

Another practice I’ve incorporated into my work is recognizing positive intentions. I’ve noticed that when couples acknowledge their mutual positive intentions, they’re less likely to vent emotions, encounter group–style, without considering the consequences. As Daniel Goleman points out in Emotional Intelligence, when people are angry, their reasoning diminishes. By keeping emotions at a lower level, even someone who is upset can anticipate the effect her words might have on her partner.

Focusing on the insight of impermanence is another practice that enhances our relationships. Many people forget that they and their loved ones are together on the Earth for a short time. Remembering the fact of impermanence adds perspective. Sometimes we

lose some of the pleasure of connection when we focus excessively on changing someone else’s behavior to satisfy our own desires. Often, others won’t or can’t change. That’s when the advice of the third Zen patriarch can help: “Life is easy for those who are not attached to their preferences.” For example, if I get upset when my brother doesn’t call me as often as I’d like and then badger him to call, he might feel less inclined to do so.

When we talk, in that moment, I’m probably thinking that he’s making me feel bad. I’m forgetting that life is short. I don’t know how many conversations we have left. I may not be able to influence him to call me more often. If I want to enjoy him more fully, I’ll cultivate appreciation for whatever we can share together right now.

My approach to communication has also been influenced by systems theory, which overlaps Buddhist teachings in the domain of interdependence. Systems theory explores how parts of a system (individuals, spouses, various species) interact to organize the whole system (a family, a couple, an ecosystem). When we communicate, we form a living system. The parts of our system mutually affect each other— a classic Dharmic example of interdependence.

Each part of a system is contingent upon all other parts, with things changing in ways we can’t necessarily predict or control, and at the same time, everything in a system is dynamically in balance with everything else. The importance of this interdependence and the ways we constantly affect each other often go unrecognized by members of a relationship system. But when we do reflect on our interdependence, this can lead to changes— like explicitly expressing more frequent and sincere appreciation—that ripple throughout the system, enhancing goodwill and cooperation. On the other hand, some research suggests that when someone is angry and delivers a nasty message—name calling, putdowns, etc.—this can undo the goodwill that had been generated by approximately twenty previous acts of kindness. Unfortunately, the cleanup work needed to counter a single nasty message as it echoes throughout the system can be daunting.

Both Buddhism and systems theory present causality as more than the view that one event directly causes another. I first realized the slipperiness of causal interpretations

when I taught undergraduate family studies courses at the University of Minnesota. When given an assignment to write about their family-of- origin experiences, my students ascribed seemingly opposite “causes” to the same outcome. Some attributed their need for a lot of physical affection from their partners to the fact that their parents were unaffectionate with each other and with their children, while others attributed their need for affection to the fact that their parents were extremely affectionate. Seemingly opposite situations were cited as causing the same outcome. I found the causal reasoning

Understanding relationships through systems theory counters the tendency to blame. We forget that many causes and conditions contribute to how we feel. Each effect follows many previous effects. It is highly unlikely that I can isolate a single variable, such as what you said last night, and label that as the cause for my reaction today. Yet people still use phrases like “you made me feel insecure,” implying that a single cause—your criticism—created my reaction. The way people respond depends on many factors, from last night’s sleep to this morning’s headlines.

Insights into causality and blame from both Buddhism and systems theory can help people realize that they are not simply victims, that they can look to themselves to

improve their mind-states and situations. When people make the assumption that their feelings are controlled by what others say to them, this engenders a sense of

powerlessness. In addition, thinking others can control us leads to the belief that others must change in order for us to feel better. If, on the other hand, we understand that many factors influence behavior, blame becomes a less accurate way to describe experience.

Using mindful discernment to consider the influence of other causes and conditions can lead to greater awareness, more options for change, and the insight that there may be some actions we ourselves can take to improve the situation.

Finally, the application of systems theory to the practice of communication

encourages a dynamic balance between stability and change. If people can’t adequately express their differing perspectives, they sometimes find that their relationship is too static and they might feel bored. This dynamic often arises in families that avoid conflict

at all costs; certain viewpoints may seem too dangerous to express, such as acknowledging dad’s history of alcoholism. Members of such a family may not realize that perspectives that trigger controversy are a natural and potentially helpful part of life. Differences are bound to occur and can stimulate difficult yet invigorating conversations.

On the other hand, if the expression of differences becomes too extreme (as witnessed in encounter groups), chaos may ensue. When people feel overwhelmed and are unable to hear each other’s viewpoints, their differences can escalate, leading to polarization and vulnerability within their system. The key is in the balance—or the “Middle Way”—to mindfully express differences so that they are perceived as workable. Skillfully working with conflict often strengthens a family or other human system. A communication style infused by Buddhist principles and systems theory can encourage compassionate right speech, resulting in enhanced harmony and stability.

An essential guide to skillful communication. 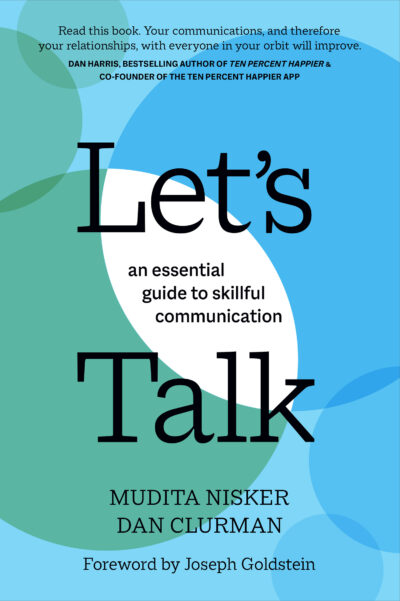